We recently had the opportunity to help a customer experiencing field failures in a particular region of the world after just a limited time in service. Visible corrosion products were present on the assemblies, which were exhibiting open power traces. Through localized extraction and ion chromatography analysis, we identified the root cause and established a recovery protocol.


What Was the Problem?


What Was the Cause?

C3 localized extraction confirmed that high levels of conductive and corrosive residues were only present in the areas with heavy no-clean residues. In some cases, there were DIRTY results in less than 5 seconds!

Ion chromatography analysis of the samples indicated elevated levels of sulfate, ammonium, and weak organic acids. Other areas of the assembly were benign, indicating that the contamination was not from the service environment. The customer did confirm, however, that the site where the failures occurred experienced relative humidity readings greater than ninety-eight percent with condensing moisture.

These levels of active flux residues, coupled with a worst case scenario of high-humidity operating environments, led to the untimely demise of these innocent assemblies. Unfortunately, their brethren that are operating in less challenging environments are still at risk.  Eventually, these flux residues will absorb available atmospheric moisture, and similar results will likely occur over an extended time period at lower humidity levels.

What Can Be Done?

Material that has already been produced must have the improperly processed flux rendered benign with an additional heat excursion. Going forward, optimizing the flux application process, along with an additional board preheat and/or addition of a heat zone after wave exposure, can result in a process where the proper amount of flux is applied and rendered benign via adequate heat exposure.

This case study presents a classic example of field conditions (98% RH with condensing moisture) contributing to - and accelerating - a failure mode. In this instance, the C3 Critical Cleanliness Control system could have identified this issue immediately and the problem could have been addressed before product ever left the area, had it been employed as a process control tool.

< Case Study: The Importance of an Effective Wash Process
Measuring the Cleanliness of Electronics With A Single Number > 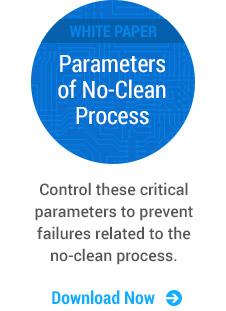